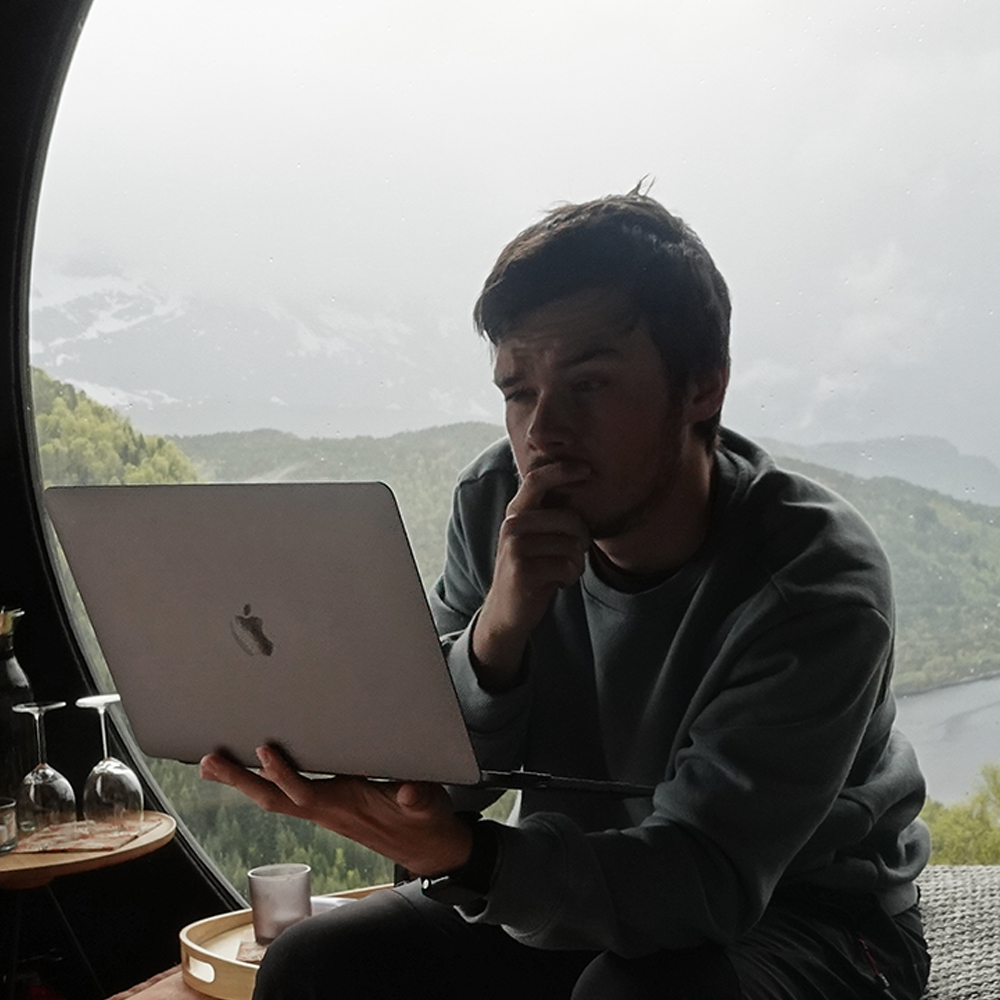 My name is Matej Vanco and I was born in Slovakia. I attended a secondary school which specialises in animation and art in Bratislava. With 10+ years of experience working on real-time applications as a full stack developer in the commercial & indie software industry, I'm capable of leading all elements of project development.

As a designer, I’m able to create emotion through pictures and attract clients with my unique compositions. I’ve been involved in numerous successful and interesting projects and have gained the necessary skills to create products that closely match the visions of my clients.

As an animator, I’m able to bring to life any object and tell a story through motion. My interest in animation blossomed at an early age, and has involved projects using stop-motion animation, classical animation, and CGI. I made my own 3D movie in Unity Engine called Neuro which won several prizes and appeared as a featured video on TheCGBros channel in 2019.

As a passionate programmer, I'm capable of creating and managing advanced systems such as file streaming, database management, various rendering techniques (rasterizer, raytracer, raymarcher), custom compiler algorithms and many more. I started programming in my early teens and it's still my favourite and primary role. I’ve led the back-end development of many projects, ported several game titles to well-known platforms (PC-Windows, OSX, Linux, Nintendo Switch, PS4, Xbox One) and created internal project infrastructure for future developers (APi). I’ve made my own 2D engine called Poly Engine written in C# from scratch to extend my skills even further.

I’m currently creating universal software extensions and plugins for Unity Engine and selling them on the Unity Asset Store. It's been 8+ years since I've been involved in the Unity Asset Store and interest for my products is still growing exponentially. In my free time I love travelling, stargazing, skiing, skating, and making my own music.

In the future I’d like to invest in new technology and develop educational applications. I thrive on challenges and creating new opportunities for anyone who is interested in self-development and moving forward.

2018 - Present
Struct9
Founder • Struct9, Slovakia.
Struct9 is a friendly team of talented and motivated freelancers all over the world who create unique applications with passion and heart.

Expert 10+ years of experience
‍
I'm capable of clear project organisation involving the creation of complete real-time products for any platform and universal purpose tools with internal development acceleration. With more than 8+ years on the Unity Asset Store creating various tools, I've become a verified seller and gained full trust of the Unity staff. I've contributed with many tools including a mesh deformation collection with various modifiers, a universal renderer called Raymarcher and a complete sculpting solution.
Intermediate 4+ years of experience

I’ve mostly used Unreal Engine for quick real-time visualization. I've spent most of the time playing around with blueprints and some C++ code. I plan to port my Raymarcher renderer from Unity to Unreal Engine in the future. I’d consider myself as an intermediate user, it's very similar to Unity and as a full stack developer I'm confident enough to use Unreal Engine in most cases if required.
Occasional a few months of experience

I started using CryEngine right after it was released for free. I found it pretty easy to use, even without any further documentation or video-tutorials. However I was a bit disappointed due to licensing changes, so I left the engine and returned to Unity/Unreal. If required, I'm willing to put in the hours to get used to it again!
Programming Languages
C#

I'm capable of creating and managing advanced systems such as file streaming, database management, various rendering techniques (rasterizer, raytracer, raymarcher), custom compiler algorithms and many more. I started programming in my early teens and it's still my favourite and primary role. I would consider myself as an expert as I'm confident enough to take a leading responsibility for the technical part of any project. I’m also familiar with Dot NET.
Intermediate 4+ years of experience

I’ve occasionally used C++ in a few applications and compilers, mostly for its speed and efficiency. I find it very similar to C# and other syntax-related languages, it's not difficult for me to adapt. I’d consider myself as an intermediate as I don't use C++ that often and I’ve not used it for commercial purposes, but I completely understand the syntax and semantics.
Occasional a few months of experience

I’ve occasionally used VB and other similar languages (F#, C, Java, Lua, Swift). During high school, I created a few prototypes and programs that helped me to extend my skills.
Shading Languages
HLSL

I’ve used HLSL to write powerful shaders for real-time applications. I mostly use HLSL in Unity and Unreal Engine for VFX and post processing. I've written several products in HLSL/GLSL such as Raymarcher, which is a real-time renderer based on a ray-marching algorithm, various fractal formulas, a collection of material shaders and more. I fully understand the syntax and semantics but would like to improve my knowledge of real-time rendering theory.
Intermediate 5+ years of experience

I fully understand the website development process, HTML as a markup language, CSS styling and back-end JS/PHP. Nowadays I use HTML very occasionally as I'm not primarily a web developer, but I’ve used it for writing custom websites. Recently (at the beginning of 2022) I made a website for my studio Struct9 and updated my portfolio page.
Expert 8+ years of experience

CSS (along with HTML) serves me for adding a custom style for websites.
Intermediate 3+ years of experience

I occasionally use JS for developing interactive websites. I fully understand the syntax and semantics, but I have limited knowledge of various libraries and functionality in general as I’m not a professional web developer.
Occasional a few months of experience

I started with 3D graphics when I was 10 years old when my father introduced me to the Autodesk 3Ds Max software. I was blown away with its potential. I fully understand all the features of 3Ds Max and the structure of 3D graphics in general. I’m very confident with modifiers, animation, simulations, rendering, VRay, texturing, rigging and overall workflow.
Intermediate 4+ years of experience

I’ve very rarely used Blender but I love the interface and am familiar with all of its features.
Occasional a few months of experience

I used Sketchup for a few months just for curiosity and to extend my modeling skills when I was still at school. I’d be still able to use it as I find it similar to Blender or 3Ds Max in manipulating with mesh (mostly for architectural purposes), but definitely not in features or rendering.
Sculpting Software
Mudbox

I’ve used Mudbox for advanced modeling & sculpting details on meshes created in 3Ds Max. I don't currently use Mudbox but I’d consider myself as an expert as I’m very comfortable with using all the features.
Intermediate 2+ years of experience

I used ZBrush very rarely as I mostly used Mudbox in case of mesh detailing and sculpting. But I very liked the interface and I wanted to extend my software knowledge back in the times. I would consider myself as an intermediate as did not use ZBrush that much, but I would be still able to use the software with all its features. I don't use ZBrush nor Mudbox nowadays as I mostly work as a software developer.
Animation Software
Motion Builder

I’ve used Motion Builder for animation editing, cleaning and tweaks, and mocap handling and recording animation cleaning and animation tweaks have been done in Motion Builder. I fully understand all the features of Autodesk Motion Builder, from actor setup to the custom solvers & plugins for development acceleration. I own the Perception Neuron Motion Capture pack.
Occasional a few months of experience

I used Houdini (in Unity) for a few months in 2021 just for curiosity. I’d definitely like to spend more time learning Houdini in the future as it's a huge development accelerator for procedural animations.
Texturing Software
Substance Painter

I use Substance Painter as a great artistic tool for texturing/ creating materials for 3D models. It's a great alternative and modern solution for texturing. I fully understand all its features and I'm capable of creating unique materials for models of any type. I’m very familiar with Albedo, Normals, Bump, Metallic, Roughness, Specular, Occlusion, Emission and Alpha terms.
Occasional a few months of experience

I used this software for a few months just for curiosity. As I own Substance Painter, I wanted to explore Substance Designer. I currently have no reason to use it but could easily do so if needed.
Other Essentials
MS Office